A country with strong agricultural traditions, Bulgaria only entered the area of ​​industrialized countries in 1970, when for the first time the contribution of industry to the formation of national income reached 50% – a share that increased further in the following decade. A very significant result, if we consider the economic history of the country: the very long Turkish domination had determined for centuries an almost total stagnation of the economy and even at the moment of independence the same agriculture, based on extensive cereal farming, showed very archaic connotations. and not very profitable; still for the entire first fifty years of independent life, despite a certain improvement in production structures linked to the commercial opening towards central Europe and Germany, Bulgaria remained an almost exclusively peasant country. After the establishment of the communist regime there was a radical renewal of the economic structures: agriculture was organized on a cooperative or state basis (while maintaining to a lesser extent the small private property, which provided about one fifth of national production); the nascent industry was nationalized and subjected, starting in 1947, to state planning within the framework of the five-year plans. The USSR provided decisive aid, supporting technically and financially the first phase of industrialization, initially oriented, according to the typical Soviet scheme, towards the creation of a heavy and basic industry. Only later did the development of light and processing industries begin. The USSR also guaranteed the purchase of Bulgarian agricultural products. This economic model changed in the second half of the 1960s, with reforms that introduced self-management and greater financial autonomy of companies, and with the adoption of a wage regime linked to productivity. All this without causing production imbalances in the agricultural sector, as was the case in the same years in other Eastern countries with the progress of industrialization. With the seventies there was a new transformation of the productive apparatus, with the singular experience, which remained unique in the socialist countries, of the “agro-industrial” complexes: approx. 300 large companies, established on a territorial basis through the aggregation of cooperatives and state farms, but also of private plots, to increase agricultural productivity and promote related industrial activities, so as to obtain a complete production cycle. The Bulgarian economy remained relative. stable with this structure throughout the seventies and eighties. The political events of the two-year period 1989-90, which determined the transition from the communist regime to a multi-party democracy and directed the economy towards a market system, had however very serious consequences: the collapse of the COMECON and the loss of the USSR market, to which most of the Bulgarian production was directed, produced a dramatic contraction of the economy, with a drop of almost 50% in the living standards of the population. Inflation above 100% and very high unemployment characterized the first years of the new regime, in a situation worsened by the wars in the neighboring former Yugoslavia with their corollary of closed borders and trade sanctions. A mini-recovery between 1994 and 1995, when inflation dropped to 33% and GDP started to grow again (+ 2.5% in 1995) was followed by a new severe collapse in the following two years, with the inflation back to 300% and the devaluation of the lev. Only at the end of 1997, with theand the World Bank obtained by the center-right government of I. Kostov, the situation has returned to stabilize, through a new privatization campaign, the attachment of the lev to a strong currency (the German mark, and then the euro) and severe cuts in public spending, which made it possible to reduce the budget deficit. Since 2000, the economy has resumed stable growth at an average rate of 5% per year, which has also made it possible to attract substantial foreign investments; unemployment fell to 5.7% (2008) and inflation, while remaining high, rose to 12% (2008).

While at one time Bulgaria was practically only a wheat producing country, in the century. XXI are now of primary importance the most profitable industrial crops. The cereal, which is based on wheat and rice, there still remains an important and vital sector, even for the rich availability of suitable lands in the Danube side. Among the industrial crops, ancient traditions and particular importance is that of tobacco, of very high quality, grown in the Marica valley, in the Rhodopes region and in Macedonia, but also that of sunflowers (in the plains areas together with cereals) and that of roses and lavender are important, from which the essence destined for perfumery is obtained and which has its center in the so-called Valle delle Rose, between the Sredna Gora and Stara Planina, where numerous distilleries operate alongside the plantations. Visit behealthybytomorrow.com for Europe agricultural products. Typical products are strawberries (especially in the Plovdiv area) and horticultural first fruits, grown with modern criteria in large greenhouses and exported to many European countries. Other profitable crops are those of fruit trees (plums, peaches, apple trees, pear trees, etc.) and viticulture, which feeds a good production of quality wines, also renowned abroad. Sugar beet cultivation is now quite extensive, the production of which is sufficient to satisfy national demand. Among the oil plants, in addition to sunflowers, soy, peanut and rapeseed are grown; cotton is widespread in eastern Bulgaria. In the livestock sector, sheep remain important, also due to the predominance of poor pastures; however, the number of cattle (especially in the more favorable northern areas) of pigs and especially of poultry is increasing; they are also quite widespread beekeeping and sericulture. The forests, which cover more than a third of the land area, are particularly dense on the hills of the Rhodopes, the Rila, the Pirin and produce wood for construction. Taken as a whole, the agricultural sector supplies approx. 7.3% of GDP (2009 estimates) and employs approx. the same percentage of the workforce. 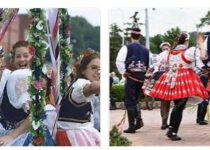