Slovenia. The Republic of Slovenia is a Central European country and since 2004 a member state of the European Union. It borders Italy to the west, the Adriatic Sea to the southwest, Croatia to the south and east, Hungary to the northeast and Austria to the north. It has a population of 2,009,000 residents. About 400,000 Slovenians live outside the country, mainly in Italy, Austria and the United States. The current Slovenia was formed on June 25, 1991 when it became independent from Yugoslavia, after a relatively short armed conflict called the Ten Day War that pitted it against the army of the former Yugoslav federation led by Serbia. It was already at that time the most developed country of that federation. In 2004 it joined the European Union. [3] Slovenia in 2007 is part of the Eurozone, the Schengen area, the Council of Europe and since July 2010 it is part of the OECD.

Danilo Türk, is the current President of Slovenia, taking office since 2007. Slovenia is a parliamentary republic according to its Constitution. The president is the Head of State and is elected every five years by popular vote. The Head of Government is the Prime Minister, currently Borut Pahor. This position is elected by Parliament. The Parliament is bicameral, made up of the National Assembly and the National Council. Currently no one has a parliamentary majority. The main parties are the Slovenian Democratic Party and the Liberal Democracy of Slovenia.

According to Thereligionfaqs, Slovenia is a small Central European state of 20,273 km² that is located between Italy, Austria, Hungary and Croatia. It is a country with a very small coastline to the Adriatic Sea by the Gulf of Trieste, through the port of Koper, on the Istrian peninsula. It is an area populated in part by Slovenians who speak Italian. The Slovenian relief includes the mountains

Karavanke, the crystalline massif of Pohorje and the calcareous plateaus of Notranjsko and Dolenjsko. The Julian Alps, with the highest elevation in the country, Mount Triglav (2,864 m), retain traces of Quaternary glacial erosion, with lakes such as Bled. Karst formations, extending from Ljubljana to the coastline, are carved out by underground rivers and constitute huge cavities, such as the 19 km long Postojna Caves. Apart from the Drava and the Sava, it is worth mentioning the river Kolpa. The climate is basically alpine, except in the areas near the sea. The climate varies from the temperate coastline, to the most extreme of the eastern plateaus and the mountains, here with greater rains in summer. About half of the country (11,691 km²) is covered with forests, making Slovenia the third most forested country in Europe, after Finland and Sweden. Remains of the original forest remain, the largest in the Kočevje area. In turn, grazing areas occupy 5,593 km² and fields and gardens 2,471 km². There are 363 km² of orchards and 216 km² of vineyards. According to WWF, the territory of Slovenia can be divided into four ecoregions:

Novo Mesto, the largest population in the Jugovzhodna Slovenija region (southeastern Slovenia) With 95 inhab./km², Slovenia ranks last among European countries in population density (compare with 320 / km² for the Netherlands or 195 / km² for Italy). Approximately 50% of the total population lives in urban areas. The official language is Slovenian, which is a member of the South Slavic language group. Hungarian and Italian enjoy official language status in the nationally mixed regions along the Italian and Hungarian border. The religion that predominates in Slovenian territory is Roman Catholic, with 57.8% of the population claiming to profess this creed; the Muslim 2.4%; the Eastern Orthodox Church, with 2.3%; Protestants, 0.9%; others, 3.7%; agnostics and atheists 10.1% and did not declare 22.8%. 19 The ethnic composition is made up of: Slovenians, 87.8%; Serbs, 2.4%; Croatians, 2.8%; Bosnians, 1.4%. There are also Hungarian (0.4%), Italian (0.1%) and Gypsy minorities. 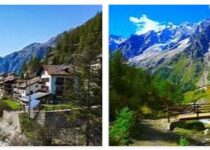 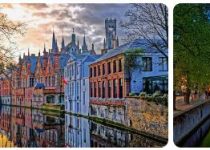