The state is made up of two historical regions, Bosnia and Herzegovina, linked by a common thread. Both – before assuming these denominations that date back to the Middle Ages – belonged to the Roman province of Dalmatia, were included in the Western Empire and then, after the occupation of the Goths (476) and the reconquest, became part of the Empire of the East (530). Slavicized between the sec. VII and VIII, Bosnia and Herzegovina entered the orbit of Slavic dynasties. The first was already in 1102 independent banat, tied by vassalage (from 1120) to the king of Hungary to whom it belonged directly starting from 1250. After a period of struggles between the counts to whom its territory had been entrusted, at the end of the century. XIV Bosnia and Herzegovina was annexed to an independent kingdom which, under Tvrtko I, included a vast territory including the domains of the dissolving Serbian kingdom and therefore also Herzegovina. In the second half of the century. XV Bosnia (1463) and Herzegovina (1482) were conquered by the Turks to whom they remained until 1878 when, in the Congress of Berlin, it was established that they were given in administration to Austria-Hungary, while maintaining the right of Turkish sovereignty over the territory. In 1908 Austria unilaterally proceeded to annexation.

According to AbbreviationFinder, this resulted in a situation full of tensions which resulted in the assassination of the heir to the throne of the Habsburg empire, Archduke Francesco Ferdinando, by a young Bosnian Serb member of a nationalist association, which took place in Sarajevo on June 28. 1914. In 1918, Bosnia and Herzegovina were integrated into the Kingdom of the Serbs, Croats and Slovenes, which in 1929 changed its name to the Kingdom of Yugoslavia; during the Second World War they were invaded by Italian-German troops, even if formally they were annexed to Croatia, A puppet state under the Ustasha regime created by the Nazi-fascists. Main operational theater of the partisan resistance, since 1945 it has become one of the six constituent republics of Socialist Federal Yugoslavia founded by Tito, a communist leader during the struggle against the Italian-German occupation forces and against the internal anti-communist nationalists. In October 1991, on the wave of nationalistic claims that, starting with the secession of Croatia and Slovenia, had upset Yugoslavia, the Parliament of Bosnia and Herzegovina unilaterally voted for independence. But this decision, reached with the agreement of Muslims and Croats and sanctioned by the popular referendum of 29 February 1992, was violently contested by the Serbs – the third largest ethnic group present in the region – who on 7 April 1992 (simultaneously with the international recognition of the new state) proclaimed the independence of the Serbian Republic of Bosnia, leaving the federal presidency of Sarajevo and starting a long and bloody civil war. The scenario of the ethnic conflict that had already opposed Croats and Serbs in Croatia was repeated, this time complicated and amplified by the presence of the Muslim component. The capital Sarajevo and the most important centers, mainly inhabited by a Muslim population, they were being held in a vice by Bosnian Serb fighters. The blockade of supplies and bombings left Sarajevo isolated from the rest of the world for approx. three years, until the end of the war.

On the rest of the territory, first the Serbs and subsequently also the other national components implemented the practice of the so-called “ethnic cleansing”, consisting in the physical elimination or expulsion of all those belonging to ethnic groups other than their own, in order to achieve homogeneity housing. Neither the sending of UN peacekeepers to Bosnia, nor the embargo against Yugoslavia supporting the Serbian component, nor the peace plans presented on several occasions by international organizations proved to be sufficient to end the conflict. In reverse, the pacification projects that involved an ethnic division of the territory triggered a further resurgence of the conflict, also unleashed between the two Bosnian-Muslim and Croatian entities, which at least formally until the first months of 1993 were allies. Divisions also occurred within the Muslim front, resulting in a momentary secession of the region of Bihac in northwestern Bosnia by the Sarajevo government, which led to a new internal war between Muslims, while all the proposed solutions proposed at the international level fell one after the other. In the first two months of 1994, further atrocities occurred in Sarajevo where the bombs of the besiegers hit children, people lined up in front of shops, people inside a market.

The wave of international protests led NATO to issue an ultimatum for the withdrawal of the Bosnian Serb positions around Sarajevo. The grip around the Bosnian capital also eased due to an agreed truce between the fighters of the two sides, but the conflict, despite some raids NATO, he continued furiously. After a few months of relative calm, hostilities flared up again in the summer of 1995 with an attack by the Serbs on the enclaved cities.Muslims who remained in eastern Bosnia, despite having been declared protected areas by the UN and placed under its protection. The most serious massacre took place on 11 July in that of Srebrenica, garrisoned by the Dutch blue helmets who did nothing to stop the killing of approx. 8000 civilians fleeing to areas under Muslim control. However, this massacre, authorized by General Mladić commander of the Bosnian Serb army, determined the decisive turning point in the resolution of the war. 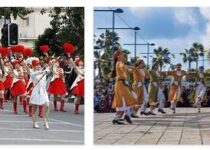