Where is the country of Ivory Coast located on world map? According to COUNTRYAAH.COM, Ivory Coast is an independent nation located in Western Africa.

From the Gulf of Guinea in the south, the land area of ​​the Ivory Coast gradually increases to the north. The coastal plain is a strip of land that is at most 65 km wide and in its eastern part is filled by elongated lagoon lakes. These are separated from the sea by sand reefs, which extend both above and below the water surface and make access to the land more difficult from the sea side. Inside the coastal zone lies a 180 km wide lowland belt, which was previously covered by equatorial rainforest. The lowlands penetrate much further north in the eastern part. The west side, which even has a rocky coast, rises to a highland, whose culmination takes place in the Nimba Mountains (1,752 m above sea level) in the northwest. To the east from here, an open plateau with ridge ridges, e.g. Como mountains in the northeast. A number of larger rivers flow south, from the west, Cavally, which forms a border with Liberia, then Sassandra.

The whole country, apart from a narrow coastal strip, lies within one of the great African cratons, which is why the bedrock is made up of Precambrian crystalline rocks. The coastal plain within the very outermost, hardened alluvial deposits is built up by sedimentary rocks from the Miocene. The soil cover is furthest in the south, while well-developed laterite soils with high iron and aluminum content are increasingly being developed in the previously wooded areas. In the northern savannas, hard salt-earth moons, formed by rapid evaporation, alternate with richer, black-earth-like moons.

The entire Ivory Coast lies within the tropical climate area. The latitude of 8 ° north latitude forms a boundary between the equatorial rainforest climate in the southern part of the country and the savannah climate north of it. In the south, the average temperature is 21–33 °C and there are two rainy periods. In the coastal area, they fall during May – July and October – November, providing about 2,000 mm per year. North of said climate limit, the average temperatures vary between 24 °C and 39 °C. During December to February, the dry, hot desert wind blows the Harmattan from the northeast. The dry season lasts from November to March. The rainy season, which falls in April-October, gives about 1,150 mm per year. Relative humidity is around 70%. In the mountain areas, 2000 mm of rain falls with a maximum in September.

The natural vegetation in the country’s southern half (coast and lowland to the south) is tropical rainforest, while the northern half has savanna. The rainforests in the southwest have been very rich, which is probably because they are part of the so-called Upper Guinea Refuge, which was wooded even during the recent ice ages. Here you will still find African elephant, chimpanzee and a host of other higher primates, leopard, African buffalo, bongo and several other antelopes, hippopotamus and dwarf hippopotamus. The savannas in the north include anubis baby (Paʹpio anuʹbis), lion, African elephant, many antelopes, terrestrial pigs and in rivers and wetlands Africa’s all three crocodile species, namely the nile crocodile, dwarf crocodile and African smalnos crocodile (Crocodyʹlus cataphraʹctus).

During the 1970s, the Ivory Coast was Africa’s largest and the world’s fourth exporter of tropical hardwood, which led to a rapid decline in forests. As roads were built for harvesting, small farmers penetrated further into the forests; their burning and logging destroyed another 4-5 times the volume of wood taken out by the loggers. Around 1990, virtually all original rainforests were gone, including progressive lateritization as a result.

The Ivory Coast had eight national parks in 2010. The two largest are Komoé in the northeast, a savanna and dry forest with, among other things. Anubis baby and many antelope species, as well as the rainforest Taï in the southwest with dwarf hippopotamus, bongo, many species of primates and over 150 endemic plant species. 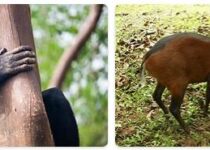 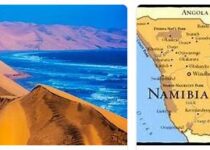 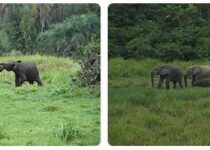