Where is the country of Sudan located on world map? According to COUNTRYAAH.COM, Sudan is an independent nation located in Northern Africa.

Most of Sudan is occupied by a huge basin area, 200-500 m above sea level, surrounded by mountains and high plateaus and crossed from south to north by the Nile. This one comes in from South Sudan as the White Nile. On the vast clay plains of eastern Sudan, the greatest amount of water has been lost through evaporation, but thanks to the water-rich tributary Blue Nile from the mountainous areas of western Ethiopia, the Nile is able to make its way through the dry areas of the Nubian Desert in the north. Here are large areas of rocky deserts and sand dunes, where the Nubian sandstone reaches most of the surface and forms plateau mountains.

Along the border with Chad, the Erdiplatån rises and further south the Darfur plateau, where young volcanoes have broken through the granite bedrock, which in Jebel Marra reaches 3,042 m above sea level. In southern Sudan lies the Kurdufan plateau area with a large amount of higher residual mountains. Along the Red Sea there is a narrow coastal plain, and within it the fault slopes rise to more than 2,200 m above sea level. The area along Ethiopia is also mountainous.

The land cover in Sudan is in the north sandy desert soil and in the southern and middle parts largely vertisol.

Sudan has a tropical climate that is dry in the north with desert climate in the northwest and steppe climate in the northeast, but savannah climate in the south. The average temperature for the months varies between 23 °C and 34 °C, except in the highest parts, where December and January are below 20 °C. The rainfall is close to 0 mm in the north, where the northeast passage prevails most of the year. Sandstorm (habu) sometimes occurs, especially around Khartoum, accompanied by rain showers. The middle and southern parts of the country have rainy periods of varying length during the summer months.

Sudan’s tropical climate is characterized by high temperatures and summer rain, especially in the south.

The desert that dominates the northern parts is almost entirely vegetation-free, with predominantly annual species. The semi-deserts and savannas south of it have shrub vegetation with occasional deciduous trees and are dominated by grass, various acacias, Commiʹphora, Terminaʹlia and Maerua [mɛ: ʹ-] (capers family).

In Sudan there are representatives of a large part of the African fauna from savanna species to semi-desert and pure desert animals. There are about 70 species of larger mammals.

On the savannah there are many antelope species and large predators as well as house monkey, green markata and anubis baby (Paʹpio anuʹbis). In the desert areas of the north, fennel, pale fox (Vuʹlpes paʹllida), desert cones (Paraechiʹnus aethioʹpicus) are common, while sable ore has now disappeared from Sudan. Larches and flying chickens are common in deserts and semi-deserts. The savannas include ostrich, northern ground eagle (Bucoʹrvus abyssiʹnicus) and many species of weaver.

In 2012, Sudan had four national parks, including the Sanganeb Atoll Marine Park in the Red Sea and the Dinder National Park in the southeastern part of the country. 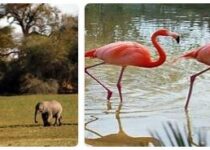 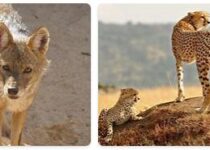 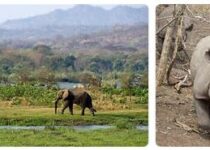